The Court Battle Over Voter Suppression in North Carolina

A week-long hearing will get underway tomorrow in Winston-Salem in Federal court for the Middle District of North Carolina before U.S. District Judge Thomas D. Schroeder. Judge Schroeder is being asked to issue an injunction against the new Republican voter laws that cut the Early Voting period, eliminated same-day registration, and did a jillion other things harmful to ballot access.

If Judge Schroeder agrees with the plaintiffs that House Bill 589 unfairly targets and discriminates against certain classes of voters, he could suspend the implementation of the law for this November's general elections while its ultimate constitutionality is tested.

Winston-Salem Journal coverage of the suit.

What has gone largely unnoticed is that among the plaintiffs are seven North Carolina college students who are also arguing that they have been unjustly targeted, since the photo voter i.d. section of H589 explicitly prohibits the use of university-issued i.d.s as well as out-of-state drivers' licenses. Today's New York Times has in-depth coverage of the college-age plaintiffs. 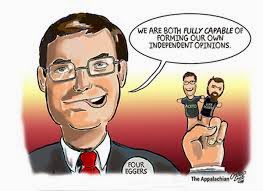 Those of us in Watauga County certainly know well enough that the local Board of Elections, manipulated by county attorney Stacy Eggers IV ("Four"), and enabled by the new Republican majority on the State Board of Elections in Raleigh, have made a conscious and concerted effort to discourage the voting of Appalachian State University students.

The hearing that gets underway in Winston-Salem tomorrow is only one of several legal challenges that will fight back against the local and state-wide attempts to fence college students away from ballot access.

Posted by J.W. Williamson at 7/06/2014 09:32:00 AM
Email ThisBlogThis!Share to TwitterShare to FacebookShare to Pinterest

The only thing that most Watauga republicans want from ASU and Appalachian students, faculty,and employees is their $$$$!

Given the current Eggers-Aceto majority on the Watauga County Board of Elections,we are 'ground zero' in the State for suppression of college student voters. These guys have taken the new state-wide voter suppression campaign and done everything they can locally to further minimize the opportunity for ASU students to vote. You can see from the court document filed (link in NY Times article) that Watauga is front-and-center as example of local actions beyond the new State-Voter-Restrictions to be the stopper for ASU student voters.