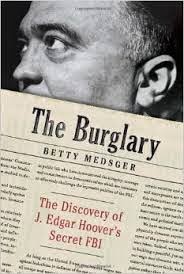 On the night of March 8, 1971, eight persons broke into the FBI office in Media, Pennsylvania, and stole suitcases full of secret files. At first, the break-in was known only to the FBI, whose crazy czar, J. Edgar Hoover, was flipping out -- quite literally, flipping out -- at the thought that unknown persons were now in possession of some of his darkest secrets.

Gradually, the burglary became known to Americans as the burglars began sending copies of some of the files to journalists. One of those newspaper people was Betty Medsger, who was working for the Washington Post. She became one of the first journalists to expose the secret war that J. Edgar Hoover was waging on political activists he didn't approve of, especially campus anti-war activists and most especially black activists still struggling for basic civil rights.

Those burglars were never caught. J. Edgar's total inability to crack the case, even though he devoted millions of $$ of resources and thousands of hours of investigation by hundreds of special agents, inadvertently revealed another secret about the FBI: the cult of personality that ruled it also rendered it massively ineffective.

That burglary in Media, Pa., sprung a leak that has never stopped spewing new revelations about how one twisted man turned the Federal Bureau of Investigation into his personal peephole, a perfect expression of his paranoia, his bigotry, his closeted fear of other people, and of other ideas.

Betty Medsger has now, over 40 years after the burglary and with the cooperation of the burglars, finally revealed the identities of the thieves, their motivations, their planning, and their execution of the theft that was one of the landmarks in saving our Republic from the sick mind and twisted motives of J. Edgar Hoover.

The book Medsger has written, The Burglary: The Discovery of J. Edgar Hoover's Secret FBI, is riveting. It often reads like a spy thriller, but it goes much deeper. At the very least, it is essential history of where we were as a nation in the late 1960s and early 1970s, an emotionally exhausted state where we seem to have arrived again.

Hoover was able to maintain surveillance on hundreds of thousands of innocent Americans out of fear, and use that surveillance to disrupt, intimidate, smear, and even drive to suicide Americans he did not like -- fear of Commies, fear of "radicals," fear of "peace activists," fear of black revolutionaries.

As Medsger points out, Americans are still living in the grip of fear, especially after 9/11, and our government has only expanded -- vastly and without let-up -- its ability to spy on us all, relentlessly and without meaningful oversight. The revelations we all owe to Edward Snowden are an exact analogy to the 1971 Media burglary.

Under Barack Obama, the surveillance nation has only grown. He has not only defended NSA surveillance; he's expanded it. The Obama administration has criminally prosecuted more government whistle-blowers than have all previous presidents combined. Some of the curbs imposed on the FBI after the Media revelations have been lifted by Obama. One of the NSA documents that Snowden released shows that the agency scoops up millions of personal digital address books at a daily rate of 444,743 from Yahoo, 105,068 from Hotmail, 82,857 from Facebook, 33,697 from Gmail, and 22,881 from other providers.

It's as though the ghost of J. Edgar is chortling from the grave, while we Americans allow the fear of external and internal unknowns to make us obedient to this massive and democracy-threatening spy system.