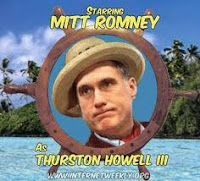 OMG! Civitas poll (Civitas!) has Obama up over Romney in NC by four points.

In related news, it seems crystal clear that Mr. Romney manipulated his 2011 taxes, declining to take all the deductions he could have under the George W. Bush tax cuts for the filthy rich, so that he could show he paid 14%, rather than an incendiary 9%. Uh, 14% is incendiary enough, especially when Mr. Romney insists that it's perfectly fair for him to pay such a low rate on $20 million in income, while someone making $55,000 pays twice the rate.

Perhaps the voters of North Carolina are catching on that in Mr. Romney's case, wealth breeds cluelessness. He's not just a rich jerk. He's a rich doofus.

Posted by J.W. Williamson at 9/25/2012 09:19:00 AM
Email ThisBlogThis!Share to TwitterShare to FacebookShare to Pinterest
Labels: Barack Obama, Mitt Romney

I don;t see the concern on either side. Obama and Romney are just alike.