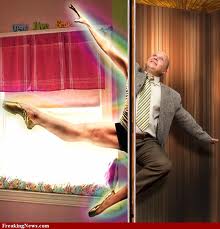 Hattip: Steve Harrison, drawing on Bloomberg Businessweek, over at BlueNC.

Sometimes Republican candidate for governor Pat McCrory just can't conceal his "statist" impulses, the belief that government can -- and SHOULD -- make big investments in infrastructure, etc.


McCrory, 55, spent his time as mayor [of Charlotte] urging public investment in infrastructure, especially in the urban core locals call uptown Charlotte that is the center of convention activity. Companies with headquarters in the city, including Bank of America Corp. and Duke Energy Corp. (DUK), supported the city’s efforts, which occurred as the population grew by 48 percent to more than 711,000 during McCrory’s tenure, according to the Charlotte Chamber of Commerce.

McCrory’s willingness to spend public money on major construction projects runs counter to the rhetoric from national Republicans, who say government needs to be smaller and spend less money.

“We ignore one of our best presidents ever, and that’s Eisenhower,” he said, referring to Dwight Eisenhower’s creation of the interstate highway system. “Obama had a chance to be a Roosevelt-type figure with infrastructure, but he failed miserably.”


Eisenhower, not Reagan? Obama should have spent more stimulus money?? Getting pretty far off the Tea Party reservation, aren't you, Mr. McCrory?

Posted by J.W. Williamson at 9/07/2012 08:42:00 AM
Email ThisBlogThis!Share to TwitterShare to FacebookShare to Pinterest
Labels: Pat McCrory

graphic genius! if only the unspeakable joke wasn't on the backs of every decent, hardworking tx/pyr in the land. keep rattling, DUDE!