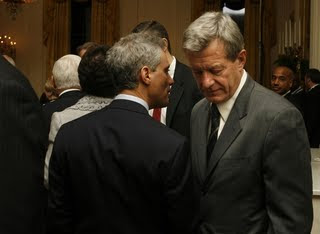 Which part did you like best, that the five Senate DINOs below voted with their puppet-masters, the insurance corps, yesterday on the Rockefeller amendment, or that Sen. Baucus said he actually supported a public option but wasn't voting for it because it couldn't pass the Senate because he would vote against it?

The Corporate Kleptocracy is alive and well in the U.S. Senate and doesn't even bother any more trying to cover its own hilarious twisted logic. Thank you so much for playing, and don't forget your parting gifts: