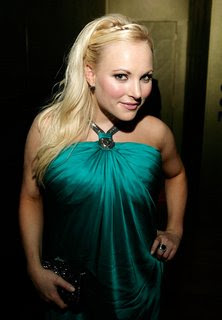 She thinks the new Republican twittering class (Virginia Foxx, you're fingered! -- is a joke:

"Simply embracing technology isn't going to fix our problem. Republicans using Twitter and Facebook isn't going to miraculously make people think we're cool again. Breaking free from obsolete positions and providing real solutions that don't divide our nation further will. That's why some in our party are scared. They sense the world around them is changing, and they are unable to take the risk to jump free of what's keeping our party down."

Thus was it written, "And the sorority girl shall lead them."
Posted by J.W. Williamson at 4/19/2009 04:51:00 PM
Email ThisBlogThis!Share to TwitterShare to FacebookShare to Pinterest
Labels: Meghan McCain, Steve Schmidt, Virginia Foxx