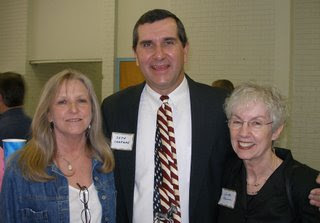 Attendance at the convention, held at the Watauga High School auditorium, was officially placed at 146, making it the largest attendance since the 1997 convention (when more than 300 delegates voted in new top-to-bottom progressive leadership of the local Democratic Party).

On Saturday, Chair Diane Tilson was reelected for another two-year term as Party Chair, as were most of the successful team of executive officers from the 2005-2006 biennium: Charlie Wallin, Marjory Holder, Anna Sagel, Susan Phipps, Celia Roten, Dennis Grady, Loretta Clawson and one of "those Williamsons." New executive officers for the 2007-2008 biennium include Roy Bracey, Marsha Walpole, and Ingrid Kraus.

Taking turns at the podium were many of the new Democratic team of office-holders elected last November, including Sheriff Len Hagaman and State Representative Cullie Tarleton. State Senator Steve Goss was absent, attending the county convention in Alexander County, but his campaign manager Larry Turnbow spoke for him.

It was a great day for Democrats. Woot!
Posted by J.W. Williamson at 4/16/2007 10:46:00 AM
Email ThisBlogThis!Share to TwitterShare to FacebookShare to Pinterest