Cruising for a Bruising?


I've been reading -- always a dangerous provocation to thinking -- about the male frat-brat culture at Georgetown Prep in the early 1980s and about the male drinking society at Yale University (particularly in the DKE fraternity, "the Dekes") in the mid-1980s, both places where Brett Kavanaugh cobbled his character, and I'm beginning to understand the "incandescent fury" that's arisen among American women about male privilege (that phrase in quotes belongs to Michelle Goldberg).

Those entitled guys, swaggerers and takers -- haven't we all known at least one? (And where's there one, there's usually a clique.) Guys who are either completely oblivious about the feelings of anyone outside their circle, or completely indifferent. The true elites of this society, "masters of the universe" on Wall Street and everywhere else there's power, and not because they're smarter than anyone else but because they've been groomed, trained in the levers of control. They got to go to Georgetown Prep, and you didn't.

At Georgetown Prep, the elite Catholic boys school where Kavanaugh was on the football team and captain of the basketball team, the guys dated Catholic girls from nearby schools like Stone Ridge, Holy Cross, and Georgetown Visitation. Kavanaugh's football team, which included the now notoriously absconded Mark Judge (who supposedly jumped on the bed that night and inadvertently broke up the fun) -- the nine varsity football players all listed an obscure club on their senior yearbook pages: "Renate Alumnus" (that's the picture from the yearbook to the right).

The word “Renate” appears at least 14 times in Georgetown Prep’s 1983 yearbook, on individuals’ pages and in that group photo (Kate Kelly and David Enrich). "Renate" -- is that Latin? No, turns out, the key to who "Renate" was lies in this short poem popular in Kavanaugh's clique and also printed in that 1983 yearbook: “You need a date / and it’s getting late / so don’t hesitate / to call Renate.”

Okay, we get it. "Renate Alumnus" was an inside joke that all those guys had had sex with Renate Schroeder, then a student at one of the nearby Catholic girls’ schools. She didn't know she was the butt of that joke. In fact, Renate (now Renate Dolphin) didn't know about those references in the Georgetown Prep yearbook of 1983 until this week, when someone showed her.

Wanna know the big irony? Renate Schroeder Dolphin was one of those 65 women who had been induced to sign a letter testifying to Brett Kavanaugh's sterling character and his high regard for women. That was then. (About 60 of those women have subsequently rescinded their testimonials.)

“I learned about these yearbook pages only a few days ago,” Ms. Dolphin said in a statement to the New York Times. “I don’t know what ‘Renate Alumnus’ actually means. I can’t begin to comprehend what goes through the minds of 17-year-old boys who write such things, but the insinuation is horrible, hurtful and simply untrue. I pray their daughters are never treated this way. I will have no further comment.”

I'm also inclined to believe Kavanaugh when he said this last night on Fox:

MACCALLUM: So you’re saying that through all these years that are in question, you were a virgin?

MACCALLUM: Never had sexual intercourse with anyone in high school –

MACCALLUM: – and through what years in college since we’re probing into your personally life here?

Jumping clumsily on Blasey Ford at a drunken party, with his best swordsman friend standing right there as witness and egging him on, and trying to get her one-piece down, and then what, Brett? Whattya gonna do then, Big Boy? Put your hand over her mouth, because this girl apparently didn't get the memo about your right to have sex? 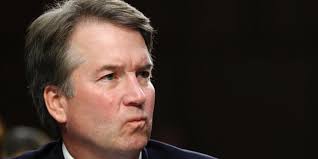 The adolescent clunk-headedness of what Blasey Ford has told seems obvious to me now, if I believe what Kavanaugh said -- his actual virgin male panic of needing that first notch on the ole belt buckle, the need to prove oneself a man in a male culture that values conquest above courtship, and the need for a witness (or backup) and the flagrant use of a 15-year-old woman that he thought could be used for this purpose -- that's the only scenario I can come up with ... when I believe them all, and I believe them all, even Kavanaugh.

If Michelle Goldberg is correct, Brett Kavanaugh is a type that's so used to its privilege that it's blind to others not of its club. These guys never see their comeuppance coming and are outraged at its arrival.

Posted by J.W. Williamson at 9/25/2018 11:41:00 AM
Email ThisBlogThis!Share to TwitterShare to FacebookShare to Pinterest
Labels: Brett Kavanaugh, U.S. Supreme Court

I don't believe anything he says as he is a lying POS.