Wells-Fargo to McCrory: Can You Spell "One-Term Pat"? 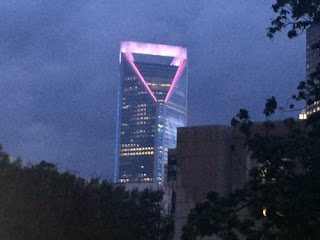 Wells-Fargo not only signed the open letter to Governor McCrory demanding the repeal of North Carolina's new anti-LBGT law (HB2), but the huge corporation also recently lit the 48-story Duke Energy Tower in Charlotte in pink, white, and blue, the colors of the transgender solidarity movement.

BREAKING NEWS
PayPal, which just last month was announcing a plan to expand into Charlotte with 400 jobs at a global operations center, has reversed course because of HB2. Said PayPal in a prepared statement, “The new law perpetuates discrimination and it violates the values and principles that are at the core of PayPal’s mission and culture. As a result, PayPal will not move forward with our planned expansion into Charlotte.”
Read more here: http://www.newsobserver.com/news/politics-government/state-politics/article70001912.html#storylink=cpy
Posted by J.W. Williamson at 4/05/2016 09:40:00 AM
Email ThisBlogThis!Share to TwitterShare to FacebookShare to Pinterest
Labels: Charlotte, homophobia, Pat McCrory

Too bad the few islands of reason in North Carolina, including Charlotte, Boone and Asheville, have to constantly pay the price for our degenerate State government, but until we can get rid of the Jonathan Jordans and Franklin Graham automatons such as Soucek and his successor, we will continue to be on the wrong end of the stick.

To Wells - Fargo: Can you spell 'money launderer' ?

To be fair, Wachovia was doing the money laundering. Wells Fargo just bought them.