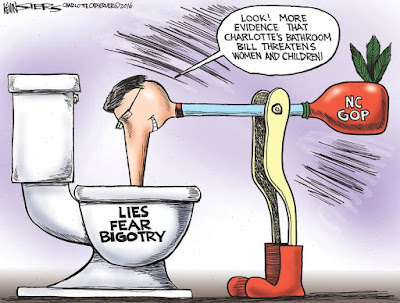 Kevin Siers, in the Charlotte Observer.

Meanwhile in South Carolina, conservative Republican Governor Nikki Haley told her state that a similar "bathroom bill" was not needed in the Palmetto State.

Haley was reacting to the introduction of another one of those "save the women and children" fear-mongering bills, introduced in the South Carolina legislature by a Republican running scared for reelection (he has three primary opponents, and the South Carolina Chamber of Commerce is actively campaigning against him).

It's sobering, O my children, when South Carolina looks and acts much saner than the Tar Heel State. (I can't believe the words that are about to come out of my keyboard:) Nikki Haley appears to be the only rational Republican governor left in the nation.

Catching up on some other HB2 news: Newly installed, pearl-wearing president of the University of North Carolina, Margaret Spellings, the hunting dog who follows the whistles from the Republican leadership in the NC General Assembly, has issued a letter to all UNC constituent chancellors that they must follow the letter of the HB2 law.

We can't be surprised that the lackey jumps when the masters crack the whip.

It's all quite ridiculous, as only political grandstanding can be, since no one -- no one -- has suggested exactly how such a pile of HB2 doodoo could ever be enforced.

CAN a state employee - however high-ranking - publicly come out against a state law like this? NCGA has pared the UNC-system budget to the bone. What do you think they'd do if Spellings came out against their new bill?

Spellings and the UNC-system chancellors are in a tough place. But Spellings is making it clear she's no fan of the bill - says it "sends a chill" through the system.

They can and should.

I think we all know they have nothing to loose - whether they come out against it or not, the legislature will make more cuts to the UNC system until it winds up like Wisconsin or Louisiana.

How can such a bathroom bill ever be enforced you ask. First, it should be obvious, even to the most partisan liberal, that the bill is primarily symbolic. LGBTs will continue to use the bathrooms where they are most comfortable and no one should be the wiser unless they flaunt that they are of the wrong sex in a gender specific bathroom. Even then, probably no one will care enough to complain.

The only situation where there might be a need for enforcement action would be when someone who appears obviously to be a male enters a female restroom or locker room (or vice versa) and a female (or male) COMPLAINS to the owner/operator of the facility. In that very rare instance, the operator could decide whether to ask the subject of the complaint to exit the gender specific facility. If the request is refused, law enforcement could be called to remove or arrest the individual. If there is a legal question as to the gender of the individual, that would have be determined by law enforcement or by the courts.

So enforcement issues are a disingenuous ruse. The real import of the law is what is the state's policy regarding gender specific facilities and should LGBT individuals have access to whatever facility they prefer? Businesses can operate their privately-owned facilities however they deem appropriate, now without government interference. In public schools, universities and other publicly-owned facilities, state policy is to provide either gender specific facilities or single-occupancy unisex bathrooms, or both.

This blog post has been making the rounds this weekend, showing how the law will result in harassment by police of trans people - or people perceived to be trans - that a particular police officer is suspicious about.

Also, one of the most vocal backers of HB2, has been going out of his way to publicly harass a teen transgender here in NC. He's also the same guy that threatened women's health providers by circulating "wanted" posters.

This will only result in harassment and, eventually, more violence against trans people in NC and LGBTs more generally in the state. This was never about keeping us "safe" - it's always been about publicly passing moral judgements on and publicly shaming LGBTs to appease extremist evangelicals.

Anonymous above said: "The only situation where there might be a need for enforcement action would be when someone who appears obviously to be a male enters a female restroom or locker room (or vice versa) and a female (or male) COMPLAINS to the owner/operator of the facility. In that very rare instance, the operator could decide whether to ask the subject of the complaint to exit the gender specific facility. If the request is refused, law enforcement could be called to remove or arrest the individual. If there is a legal question as to the gender of the individual, that would have be determined by law enforcement or by the courts."

So how is that any different from what would have happened BEFORE the bill was passed? The bill doesn't give anyone the right to commit crimes or harass people in the restroom.

What do you think about the REST of the bill? The other, unrelated issues? To me, the first part was just a cynical ploy to ramp up support from conservatives, while the other provisions are the really important things that EVERYONE should be concerned about.

With Republicans mandating Photo ID cards in order to protect against the non-existent problem of in-person voter fraud, I am surprised they haven't yet proposed such a system for using public restrooms. A Gender ID card, and card readers installed on all public restroom doors will effectively enforce HB2. Anyone not in possession of a Gender ID card will be required to use provisional toilets of the blue, stand-alone type. Can't afford a birth certificate needed to obtain a Gender ID card? Personal-use provisional toilets are located directly behind Kenan-Flagler Business School, and elsewhere around campus. So take your business there.

Of course transgender people using the restrooms of their choice was never a problem prior to the Supreme Court upholding same-sex marriage and the onslaught of GOP sponsored "religious freedom" bills that followed, which are nothing more than a license to discriminate against the LGBT community. If nothing else Republican politicians are known for two things: passing laws to regulate non-existing problems (primarily of a social nature), and the elimination of laws that actually protect the public from corporate and financial malfeasance.

Seems to me this is backwards thinking.

What's the worst that can happen, no one will complain right?

That is the end result of the hate and fear pushed by bills like this.

What??? The Chancellor of the North Carolina University system has that said state universities must follow state law. OUTRAGEOUS!!

Anon 9:14 wrote: "So how is that any different from what would have happened BEFORE the bill was passed?"

On big difference is that a local government in NC can no longer PROHIBIT a private business from maintaining gender SEPARATE bathrooms or locker rooms. That's exactly what the Charlotte ordinance would have imposed on private owners operating rest rooms or locker rooms.