The North Carolina Republican Party is having a nervous breakdown in public over the decision by PayPal to cancel a 400-job expansion into Charlotte. PayPal announced it had changed its mind because the NC General Assembly passed, and Governor Squishy signed, HB2.

In the last 24 hours or so, Republican leaders have used all ten fingers to point in every direction. Republican Senate leader Phil Berger and House Speaker Tim Moore decided to blame Charlotte Mayor Jennifer Roberts for the PayPal debacle, with this astounding logic: If the mayor and Charlotte city council had not been so effing lib'rul, the General Assembly wouldn't have been obliged to be so effing dickish. It's the classic rapist excuse: She was asking for it.

Lieutenant Governor Dan Forest, one of the chief drivers of HB2, came up with a bizarre rationale for disparaging PayPal: “If a corporation wanting to do business in North Carolina does not see the worth of our children in the same light then I wish them well as they do business somewhere else.”

Interestingly, Dan Forest's exclusive "men only," "by invitation only," super-Christian "Black Mountain Weekend" uses the services of PayPal for your ease in paying the $250 cost (wildly appreciative hat tip to Greg Flynn for this find): 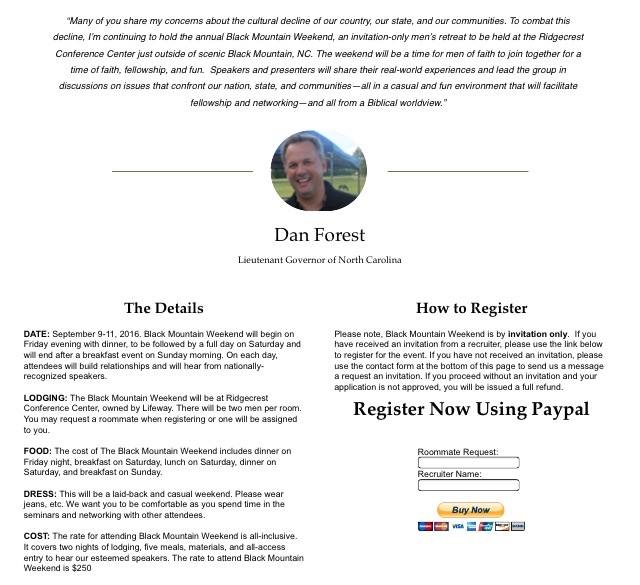