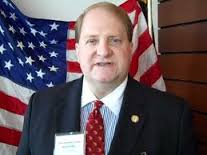 An op-ed in today's Raleigh News&Observer, "North Carolina's ag-gag law an affront to human decency," is the only antidote to Rep. Jonathan Jordan's mealy-mouthed defense of the law that appeared in the Watauga Democrat.

Jordan ignores the most obvious examples of whistle-blowing that are now felonies under the law he voted for, like reporting animal abuse at factory farms and elder abuse at factory nursing homes, and instead trots out a wholly bogus example of someone working for Walmart (Walmart!) and working there with insufficient "duty" and loyalty to the largest corporation in America.

Jordan, -- occasionally an affront to human decency himself -- willfully misrepresents the intention and the impact of the law he voted for.

Posted by J.W. Williamson at 2/12/2016 10:05:00 AM
Email ThisBlogThis!Share to TwitterShare to FacebookShare to Pinterest
Labels: Jonathan Jordan

But we sheep will keep electing him, despite his corporate allegiance, lunatic fringe ideas and lack of human decency.

The Governor vetoed it and Jordan and the General Assembly voted to override it. Sad.

I spoke with people that work in this field every day...imagine talking to experts before making up your mind. I agree with the Governor's veto of the bill.

At minimum wage, companies pay for work, not loyalty.

Once again we witness an elected official who is no more than a "street walker" in Raleigh's red light district.