Secrecy & "Anonymous Donors" Move Into UNC Along With Margaret Spellings 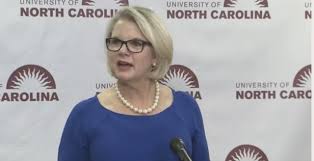 Margaret Spellings hasn't even arrived on the job as the new president of the University of North Carolina system, and already she's making troubling moves that seem designed to further weaken the system. Using money from an "anonymous donor" (Art Pope? Or some other billionaire with an axe to grind?), she's hired a private consulting firm to do an efficiency study of the UNC General Administration.

And not just any private consulting firm. According to Michael Behrent and Altha Cravey, "The subcontracting of education policy to a private, for-profit company is all the more troubling because BCG [Boston Consulting Group] is hardly politically neutral. BCG embraces a highly partisan conception of education, one that is consistent with the views of Spellings .... Specifically, BCG’s [previously commissioned] Philadelphia plan selected as many as 60 schools for possible closure, aggressively promoted charter schools, identified private companies that could replace the district’s unionized labor force and tied school success to inflexible 'achievement goals.' ”

This is where the Republicans in control of our flat earth are taking the state: "North Carolina now pays teachers abysmally, discourages teachers from seeking advanced degrees and diverts significant resources toward charter schools, which, according to a recent report by the Department of Public Instruction, serve a wealthier and whiter student population than public schools."

A commenter on the Behrent & Cravey article offers common sense on what Spellings is really up to with her commissioned, anonymously funded efficiency study:

Having spent part of my life in Corporate America as a consultant for a national accounting firm, let me tell you that there is no such thing as a “neutral” consultant. The “inside joke” went like this. A CEO interviews three consultants for a job. At the end of each interview she asks, “what is one plus one?” The first two answer: “two.” The third says: “what do you want it to be?” Guess who got the job. This is simply a “plausible deniability” and “accountability insurance” sham on the part of Spellings and her “handlers” to get cover for whatever they were going to do anyway.

"Whatever they were going to do anyway." Remember that line when Spellings actually parks her butt in that big cushy chair in Chapel Hill, come March 1.

Posted by J.W. Williamson at 1/12/2016 11:35:00 AM
Email ThisBlogThis!Share to TwitterShare to FacebookShare to Pinterest
Labels: Margaret Spellings, public education, University of North Carolina

The NC General Assembly has anew partner in their corrupt educational policies. The newest "inmate" is running with the asylum!

That Spellings and the UNC BOG are keeping the donor secret is appalling. This is a public institution - the public should know who's pulling Spellings' strings. The move to destroy the UNC system is in full swing. Very, very sad for the state of North Carolina.