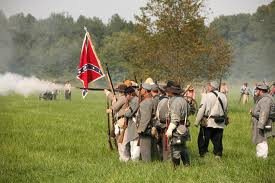 Thanks to BrotherDoc for sharing this essay about the striking similarities between the pro-secession drumbeat in the South in 1860 and the anti-government rants by the Tea Party in 2010.

The slave-holders of 1860 and the filthy rich of 2010 both managed to convince regular non-slave-holding and non-rich people to support their vested interests. And as BrotherDoc notes, they managed to do it in 1860 without Fox News.

So Southern boys with no personal vested interest in slaves, since their families were small-holders and subsistence farmers with no personal human property, signed up by the tens of thousands to die really gruesome deaths on the battlefields of Shiloh and Vicksburg and Chancellorsville and Gettysburg (and in 10,000 other battles, large and small) to keep the slave-holding planter class comfortably invested in their ruling positions over Southern society.

(We've been reading "The Personal Memoirs" of Ulysses S. Grant, so the realities of the Civil War -- rather than the Southern myth of "the lost cause" -- are quite vivid at the moment. Hearing the constant drumbeat, especially out of South Carolina, that the Civil War was not about slavery just discourages us that our Southern homeland will ever face the truth of its own history. But we digress.)

Back to this thoughtful little essay:

The slaveholders were able to persuade other white Southerners to fight, kill and die for a cause that was, in fact, against their own interests. Slavery worked against whites who owned no slaves. They had to compete with those who had this cheap source of labor. Protecting slavery also made the South hostile to other reforms, including industrialization, that could have benefited less affluent whites.

This story line should sound familiar to us now.

What is happening in the nation’s political economy today is all too similar to what transpired a century and a half ago. The benefits now accruing to middle-class Americans from concentrating more and more wealth and power at the very top — like the benefits 150 years ago of slavery to non-slaveholding whites — can be measured in negative numbers. Unemployment remains high in large part because a consumption-based economy is dependent on a less inequitable distribution of income.

Once again, talk about putative threats to “freedom” and “liberty” is being used to scare ordinary citizens into acting in the interests of the wealthy, who are focused on their own concerns, not on behalf of the people they are stirring to anger.

Posted by J.W. Williamson at 1/15/2011 10:32:00 AM
Email ThisBlogThis!Share to TwitterShare to FacebookShare to Pinterest
Labels: Civil War, teabag protest

When was the emancipation proclamation passed and did it free slaves in the north? How much was the tax passed by the north to keep the south from selling cotton to England and France? Did this have anything to do with the war?

Sounds like todays fast food industry like Yum Yum ( KFC) and Hardees have a better gig than the slave owners of history.

At least the slave owners fed and provided basic housing for their workers and had a financial stake in their slaves health and well being.

The fast food industry refuses to pay a wage workers can support a family on without charity or government assistance while the CEO of Yum Yum ( KFC ) made $8million in one year.