The Enduring Hard-On of Tim D'Annunzio 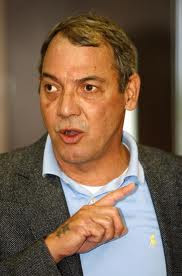 Machine-gun Tim D'Annunzio, the man publicly repudiated by the Republican state party chair back during the 2010 primary in the NC-8, has launched a tea party insurgency against the selection of Robin Hayes as the presumptive heir to the chairmanship of the NC Republican Party.

D'Annunzio favors Tim Johnson, about which there is perhaps slightly less trailing baggage than there is for D'Annunzio himself, but still plenty of baggage.

D'Annunzio does NOT favor Robin Hayes, the plush teddy bear evidently favored by Dick Burr and other country-club Republicans. "Stop the RINO establishment from controlling the NC GOP," reads a banner ad that D'Annunzio paid for on the Drudge Report. (Can't seem to catch the ad. Drudge's banners rotate, but if D'Annunzio's dyspepsia is still evident, we haven't been able to see it.)

We'll see if God and Jesus give him the job as He/they just did for the new national GOP party Chair Reince Priebus.