Protestors Outside the Koch Bros. Tea Party for Billionaires 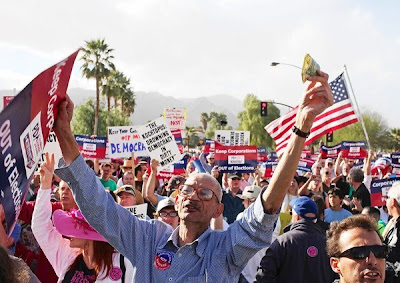 The Koch brothers, Charles & David, billionaire financiers of the Tea Party and such groups as Americans for the Prosperous, hold an annual "retreat" for similarly rich reactionaries and their elected puppets. Supreme Court justices Antonin Scalia and Clarence Thomas were reportedly guest speakers last year.

The retreat yesterday at the posh desert resort of Rancho Mirage was suddenly invaded by hundreds of people protesting the corporate take-over of American democracy.

Dollars to donuts Art Pope was among the rich attendees.

ADDENDUM
Art Pope was indeed on the invitation list (hattip: Mike). So was Robin Hayes, the new chair of the NC GOP.
Posted by J.W. Williamson at 1/31/2011 09:55:00 AM
Email ThisBlogThis!Share to TwitterShare to FacebookShare to Pinterest
Labels: Art Pope, corporate power, Koch Brothers; Robin Hayes

And the hypocrisy keeps on coming said...

And the hypocrisy just keeps on flowing from you leftists. Funny how those protests were formed and funded by George Soros and other wealthy leftists sponsored Common Cause and Center for American Progress. The hypocrisy here is astounding, yet typical and not at all surprising. When the conservatives sponsor a rally or meeting, it's big money; when the leftists do the same thing with corporate dollars, it's because the people want it and for the people, all 10% of them. What a crock.

"The Koch gathering was highly guarded by a phalanx of police officers, a helicopter, and even a no-fly zone around the resort. David Dayen, who chronicled much of the demonstration, reported that the city of Rancho Mirage contracts its police force from Riverside County sheriffs. Ironically, Koch’s front groups lobbied aggressively to kill some of the funding for the very sheriffs who worked tirelessly to ensure safety at the event. In 2009, Koch’s Americans for Prosperity (AFP) front group started a website NoStimulus.com to defeat President Obama’s stimulus plan. AFP also held Tea Party rallies denouncing the stimulus, and during the midterm campaign even ran ads attacking candidates for voting for the 'failed' stimulus."

Henery - again, you reiterate the hypocrisy from the left by addressing one side and ignoring the blatant hypocritical actions of the other. Typical. Apparently hypocrisy is okay as long as you agree. Again, very typical of a leftist.

It's not billionaires we object to. It is selfish greedy billionaires who don't care about the millions of people who made their billions possible. No one can be a billionaire without a lot of help from society and other people, unless he/she is a thief.
George Soros is a philanthropist who has helped many people by giving away more than 7 billion dollars and working to promote democracy in several countries.
Unlike the Koch brothers who are notable for running businesses that are 10th on the list of toxic 100 air polluters.

"you reiterate the hypocrisy from the left by addressing one side and ignoring the blatant hypocritical actions of the other. Typical. Apparently hypocrisy is okay as long as you agree"

You're the hypocrite, hypocrisy.

YOU are the hypocrite! You're nothing but a politicial hack.

YOU are the one ignoring the TeaBaggers' hypocrisy of saying they are for the people when they are financed by corporate interests.

I'm curious, Anne. Seeing as how we're talking about Watauga, can you (or JW, who I assume will read this to approve it) post on exactly how corporate interests financed our local TP activity? There certainly were funded groups (AFP in particular) that tried to piggy-back on the TP (using TP mailing lists, basically), but that is totally different than financing the TP (although I think most lefties didn't see the internal dynamics there, for obvious reasons).

I'd be curious to see the funding sources for the non-Blust republican commissioner campaigns (I forget their names, sorry). They were/are both TP, so if the Koch Brothers funded them you have a point. Telling me that Soucek took outside money doesn't mean squat, because he is a Republican party man all the way down, not a TP'er.

I know a couple of local businessmen who supported the organization, but that's not what your talking about.

Oh, by the way, you do know that the protest invoked nazi images and symbols of anti-government violence, right? Funny thing is, that wasn't TP'ers, it was oh-so-civil lefties. So much for all that self-righteous rhetoric from the left, huh?

The Tea Party is the "people's" movement....hmmmm. You might want to check how the charter buses which carried 80,000 clueless TPers to the Beckless rally in DC were paid for-that would be the Koch Brothers and some of their second rate cousins like Art Pope. A friend of mine has a daughter in med school in DC. The daughter is the type who studies all the time and doesn't keep up with Beck crap. The daughter decided to go running on the mall that Sunday morning. She called her mom to ask what was going on because the mall was full of "fat, stupid looking white people." To me that sorta sums up the whole Tea Party thing. The mindless being promised more fat and sugar and salt. And get them black and brown people where they belong-out of sight and mind.

ps-I forgot to mention that I'm thin and stupid looking.

TP'ers are fat, and they're stupid. And racist.

So I guess that's a "no," you can't actually identify any outside corporate money financing the Watauga TP?

And being unable to argue on the facts, you resort to the standard leftie ad hominem attacks? How boringly predictable. At least try and come up with something insteresting instead of mindlessly repeating the Journolist/MSM narrative. Please?

You lefties just hate it when someone addresses your hypocrisy straight up. So, brushfire, what you are saying is that only lefty billionaires share their wealth to help others and conservative billionaires don't? Are you kidding me???? That is the most ridiculous thing you have written. Actually, if you take a look at the giving patterns of congressional representatives republicans give far more as a percentage of their income than democrats. For starters we can compare that last 2 VPs - Cheney gave 49% of his income away while Biden gave, well, less than 1%. Pathetic. Sure, that's just one example and does not tell the whole story.

The truth is you only like it when someone agrees with you. When they don't, they obviously are supported by corporate interests. Anne, your logic is twisted and you refuse to see it. You are just mad now because all that corporate money going to the left from Soros and his other corporate "friends" did not make a difference in the 2010 elections - you basically got your ideology handed back to you in a trash bag. Even the hate groups that you like so much like moveon.org couldn't help you.

You'll never see it though - too blinded by that trash bag of ideology.

Hypocrisy - Read more carefully. I did not generalize. I specified that Soros is a philanthropist and the Koch brothers are selfish greedy toxic waste generators. That is why I admire George Soros and despise the Koch brothers. It has nothing to do with their money.

Rubashov,
Prove it! Prove that there were any Nazi signs at this protest. I've examined all the photographs I can find, and I don't see it.

There's kind of an implication that you're making that up.

brushfire - if giving money to hate groups is philanthropy, then by all means, admire soros. to me, he is nothing of the kind. And by the way, the Koch brothers also give their money in philanthropy - it's just that you see them as I see soros.

Hypocrisy - Did you know that Soros has dedicated himself to promoting non-violent transition of communist countries to democracy?

Where do you get your information about him?

Did you know the Koch industries was ranked 10th on the list of top 100 US air polluters?
Do you care?