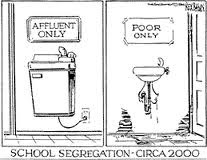 Long article in this a.m.'s WashPost profiling the attempt by the new Republican-dominated school board in Wake County to end the decades-long "diversity" policy that mixed income groups in all schools.

One might have expected some D.C. interest in Wake County because of the hiring of Anthony J. Tata, former chief operating officer of the D.C. schools, as the new Wake Superintendent. But we learn nothing from this article about Tata's tenure or reputation in D.C.

We do get word, however, direct from The Czar of All North Carolina, Art Pope, who actually granted an interview to the WashPost. He acknowledges that the new student assignment program proposed by his guys on the school board will create inner-city schools with great concentrations of poor minority students. Pope generously allows as how that might actually be a good thing: knowing where all the poor kids are will make it easier for his other puppets in government to dedicate more money to them (yeah, right!) -- not to mention that such concentrations of black & brown poverty far from the watered lawns of suburbia will make many an affluent parent rest more comfortably.
Posted by J.W. Williamson at 1/12/2011 09:42:00 AM
Email ThisBlogThis!Share to TwitterShare to FacebookShare to Pinterest
Labels: Anthony J. Tata, Art Pope, Wake County Schools

Does this mean that Williamson is a supporter of Michelle Rhee's Student First program? I have been reading about it on the other blog.