Worker Safety in NC Is Being Managed By Montgomery Burns 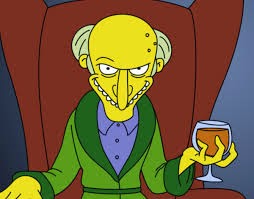 That should come as no surprise. Since she took office in 2001, she's coddled dangerous businesses and turned a deaf ear to worker complaints. Berry has actually bragged, publicly, that she sees her job as helping NC businesses avoid the "burdens" of protecting the health, safety, and general well-being of more than 4 million workers.

Her failures to enforce workplace safety regs on the poultry industry led to an investigative series in the Charlotte Observer in 2008 and a stinging editorial denouncing her Cruella Deville attitudes toward our sweating laborers.

Posted by J.W. Williamson at 4/14/2015 09:27:00 AM
Email ThisBlogThis!Share to TwitterShare to FacebookShare to Pinterest
Labels: Cherie Berry