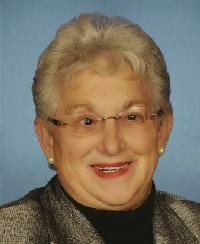 Corinthian Colleges, a for-profit "educational" special interest that has been busted for defrauding students (and the general public), has long had its tongue on Congresswoman Virginia Foxx's private parts. Open Secrets lists Corinthian Colleges among Foxx's biggest contributors. They've held fundraising receptions for her for several years.

Foxx has been a loyal promoter of the interests of for-profit colleges in the U.S. House of Representatives, and a constant, caustic critic of public higher education (well, after all, she made her living for many years in public higher education, so why the hell wouldn't she bite that hand? It's in her DNA to be spiteful). She was elevated to the chairwomanship of the subcommittee on higher education, the better to rake in the pelf.

Corinthian Colleges has now been cited for defrauding students. Heald College, "the jewel of a once-thriving chain of for-profit colleges owned by Corinthian Colleges Inc.," has been slapped with a $27.9 million fine for its misdeeds, which include misleading students and accreditation agencies about the employment rates of their graduates and showing a “blatant disregard” for the federal student loan program.

Corinthian Colleges was being probed for fraud last year, and Foxx was prominently pictured as Corinthian's favorite congressional prostitute.

But who cares, right? You can't make the voters of the Fifth District smell shit.

Posted by J.W. Williamson at 4/15/2015 10:51:00 AM
Email ThisBlogThis!Share to TwitterShare to FacebookShare to Pinterest
Labels: Virginia Foxx

The voting public only sees what it wants to see.