Oh, Optimism, You Had Me at 'Some of My Liberal Friends' 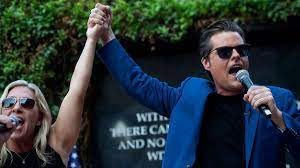 The ever readable and eclectic David Dalton, who publishes a blog out of Surry County, Into the Woods, posted weeks ago a sort of roadmap for Trump's Republican Party, "How to keep on losing." I just discovered it this morning. Dalton doesn't write about politics all the time, or even that frequently -- though he was for a time the chair of the Surry County Democrats -- but when he does, I pay attention (belated sometimes) because he's logical, fact-based, and crystal clear.

It's almost like he had me in mind -- looking out for my mental health -- when he wrote this paragraph:

Some of my liberal friends seem to be even more afraid of Trump and Trumpism now than they were when Trump was in power. They seem to be concerned that I’ve had a Panglossian failure of my faculties because I don’t think that doom is inevitable. We always knew that Trump would smash as much furniture as possible on his way out. But Trump lost. He cost the Republican Party the White House and the Senate. The power of the state is no longer at Trump’s disposal. Trump can no longer use the power of government to (like Russia) harass the opposition and obstruct justice to cover up the crimes of the powerful. Neither Trump nor his style of politics has anywhere near the support it would take to return to power. The more noise they make, the more they lose.

Dalton ticks the facts that I have under-appreciated. I go to bed most nights with Rachel Maddow echoing despair in my brain. Dalton offers me a compilation of relief. I hope to Gawd that he's right.

Dalton's closing paragraph speculates that cult members can maybe be made to see themselves as in a mirror and thus back off their foam-flecked white rage. Naturally, I have my doubts:

Thinking about today’s politics always seems to bring me back around to the question of character. What kind of people would lie and cheat to win elections, push rage, like crack, to the point that people actually would invade the Capitol with violent intent, and poison the American democracy to keep the rich rich (and untaxed) and the people they hate down? That kind of people can’t be reformed or reasoned with. They can only be contained. My view is that, not only is their power now contained at the national level, the law and norms that contain them are closing in, in the form of justice. A cracked-up, fact-free, completely unprincipled minority cannot seize or hold power without committing crimes. Seeing their leaders in prison should do a lot toward showing the Trumpian hordes that they’d best go home and rethink their lives.

Posted by J.W. Williamson at 7/20/2021 10:27:00 AM
Email ThisBlogThis!Share to TwitterShare to FacebookShare to Pinterest
Labels: Donald Trump, Trumpism

Best line is about how these folks can't be reasoned with. So obvious, but we often forget that.