"For [UNC-CH], Tuesday’s announcement from Howard could provoke a bitter recrimination."

--"Nikole Hannah-Jones To Join Howard University Faculty," headline this morning in the WashPost 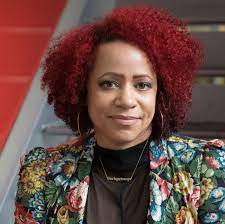 Hannah-Jones got UNC in a headlock and squeezed until they cried uncle and gave her tenure. Then she chose Howard University. Snap! That's a public punishment of our leading university that's gonna leave a mark. She promised that she wouldn't come to UNC unless she was granted tenure. She didn't say she wouldn't come even if she was granted tenure. Some academics in the School of Journalism may feel jerked around. Some Board of Trustees members will be cursing into their coffee cups. Meanwhile, student activists do not sleep.

I'm sorry she won't be stirring it up in North Carolina.

Posted by J.W. Williamson at 7/06/2021 07:52:00 AM
Email ThisBlogThis!Share to TwitterShare to FacebookShare to Pinterest
Labels: Nikole Hannah-Jones, University of North Carolina

Although what follows may not be the reason for letting sit your blog, it's appropriate to let stew this reminder of how major is Chapel Hill's screw-up. It brings back recent memories of Afro-American courses for athletes as representative of how CH operates.

The university has/has had miserable leadership. When political pressure is added they fail even more.