"In God We Trust" (All Others Pay Cash) 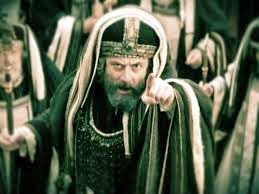 Bless the pharisees' hearts! They never tire of parading their piety, but now it's not enough for them to stand in the center of the marketplace themselves and proclaim their holiness for everyone to see. They intend to use public buildings for their purposes, which are at heart purely political purposes.

Tomorrow morning at the Watauga County Commission meeting, our commissioners will be asked to sign on to putting up "In God We Trust" on the front of the county courthouse. This is a "movement" calling itself the "US Motto Action Committee" which is inducing county commissions across North Carolina to fall into line and get all pharisaical and self-righteous. If a county commissioner said "no, thank you," to this offer, why, it would be tantamount to statesmanship, to following the Constitution and refusing to mix state and religion. But what county commissioner wants to be labeled as irreligious?

You get one guess on how that vote will go tomorrow morning.

The push to inscribe In God We Trust on North Carolina courthouses is pure b.s., Christian dominionism for the post-911 world.

Yes, Congress adopted "In God We Trust" as the national motto during the Eisenhower administration, mainly so congress persons could prove they weren't Commie Red. It was at about that same time that "under God" got stuck into an otherwise adequate Pledge of Allegiance. We had to be Under Godding and In God We Trusting to prove that we were anti-commie Americans.

Now apparently we have to prove that we're not Kenyan Muslim socialists.

As far as I'm concerned, this pharisaical movement to put In God We Trust on the courthouse is just more anti-Obama bullying of the national discussion.

If these guys were actually honest about it, and dealing with stone-cold reality, they would put up in big letters on every government building in the land, "In Filthy Lucre We Trust." That would at least cut to the chase of where we are today.

Right! Mammon is God to politicians. Just look at how the North Carolina congress caved in to the queers and didn't pass the Religious Freedom Restoration Act because some businessmen told them it would be bad for business. At least we have god fearing co commissioners in Watauga!

That durned John Welch!....Obama hater that he is!

Hypocrites, indeed. If Jesus ever appeared in Boone he'd be hanging out with the folks down at the Hospitality House or on the streets of downtown, not with these judgmental and self-righteous people who put their Christianity on parade whenever they can.

Franklin Graham, btw, brings in a salary of $1.2 million a year. http://www.cleveland.com/nation/index.ssf/2009/10/franklin_graham_moves_to_addre.html

WOW! Imagine what he could make if his wife was Secretary of State and could deal favors to foreign countries in exchange for "contributions"!!

WOW, anonymous 9:29, a long time ago, so this will not be read. Nonetheless: first, learn some English. It's "if his wife WERE Secretary..." If is conditional in uses such as this, it always implies there is something other than what is said. But you didn't learn that, which seems to limn most of what you write on this blog. Second, provide one instance of a favor provided a foreign government or national in exchange for a contribution to the Clinton Foundation. You stupid asshole, shut the fuck up unless you can be reasonable.
BTW, do you have a name? If so, use it, instead of being a chicken-shit.