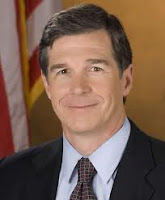 
Calling the state’s health care costs artificially high, state Attorney General Roy Cooper said he will examine whether to use antitrust laws or new legislation to reduce them.

“I’m concerned about this issue,” Cooper said in an interview. “Health care costs are high enough without artificial boosts that could come from lack of competition.”

This will be an official inquiry by a gentleman who can actually prosecute people, and it was fueled by good investigative reporting:

In a joint investigation published last month, The N&O and The Charlotte Observer found that hospitals are routinely marking up prices on cancer drugs two to 10 times over cost. At the same time, hospitals are increasingly buying the practices of independent oncologists, then charging far more for the same chemotherapy in the same office.

A previous investigation by the two newspapers, published in April, showed that consolidation has given hospitals leverage to demand higher payments from insurance companies.

That investigation also found that North Carolina hospitals are among the most powerful interest groups in state politics, which could neutralize any push for legislative reform.