Conservatives On the U.S. Supreme Court Must Be Crazy 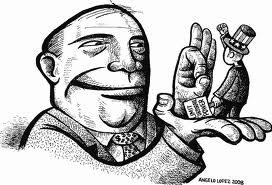 The Supreme Court this a.m. has overturned Montana's century-old law limiting corporate contributions in political campaigns. Justice Anthony Kennedy, writing on behalf of Chief Justice John Roberts and Justices Antonin Scalia, Clarence Thomas and Samuel Alito, reached the bizarre conclusion that "independent expenditures, including those made by corporations, do not give rise to corruption or the appearance of corruption," and therefore "[n]o sufficient governmental interest justifies limits on the political speech of nonprofit or for-profit corporations."

How's that for a firm grip on reality?

Posted by J.W. Williamson at 6/25/2012 09:39:00 AM
Email ThisBlogThis!Share to TwitterShare to FacebookShare to Pinterest
Labels: corporate power, U.S. Supreme Court

'How's that for a firm grip on reality?"

Keep voting for those republicans, they have the freedom of the individual at heart...

Keep voting for those republicans, they have the freedom of the individual at heart...

Thank you for stating this. It is 100% correct.

"Keep voting for those republicans, they have the freedom of the individual at heart...

Unless you are black, gay, Indian, a human being, poor, and
are not in a position to line a republican legislator and his cronies pockets, not quite 100 %

How as the Supreme Court hurt any of those you mentioned?