The Man Who Won North Carolina 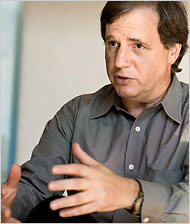 This is the man who got Missouri Gov. Mel Carnahan re-elected in 2000 weeks after he died in a plane crash. The dead Carnahan was running against John Ashcroft, who now has it on his permanent wiki profile: "lost an election to a dead man."

"Farinella was already tied into the state's Democratic organization. He had worked as a strategist for Erskine Bowles' unsuccessful U.S. Senate campaign in 2002 and Perdue's re-election campaign for lieutenant governor in 2004."

Apparently, ex-Gov. Jim Hunt tried to talk Farinella into moving permanently to NC, since his wife has family here.

About the Obama win, Farinella said, "It will change politics in the way we campaign for the foreseeable future."
Posted by J.W. Williamson at 11/17/2008 03:42:00 PM
Email ThisBlogThis!Share to TwitterShare to FacebookShare to Pinterest
Labels: Barack Obama, Marc Farinella