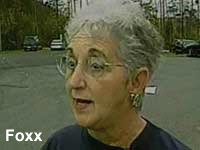 Virginia Foxx writes on The Hill's Congress Blog that she came into a meeting of the Committee on Oversight and Government Reform, but they were discussing the lawlessness of the Bush administration (refusing to turn over documents about illegal activity and stuff). So she stuck her fingers in her ears and ran from the room, because "I did not want to have to listen to the comments."

Sounds familiar, like the time she turned her back on a big crowd in Boone rather than take questions. "La-la-la-la-la, I can't heeear you!"

"The Bush administration is going to be gone really soon, it just seems like it is beating a dead horse," writes Madam Foxx, using the same rationale Republicans benevolently bestowed on the likes of Bill Clinton for getting his pipes snaked. "Why would we want to beat a dead horse?" Or, in the case of El Presidente, a dead stump.

Especially when only a war was started and maintained under false representations, and American citizens were spied on illegally, and federal prosecutors were fired for refusing to pursue politically motivated prosecutions.

Because, as Republicans, what's yesterday got to do with today, or for gawd's sake, TOMORROW? You want us to climb into the WAY-BACK MACHINE? It'll all be over soon, so just relax. That's the Republican philosophy.
Posted by J.W. Williamson at 7/17/2008 10:04:00 AM
Email ThisBlogThis!Share to TwitterShare to FacebookShare to Pinterest
Labels: George W. Bush, Virginia Foxx