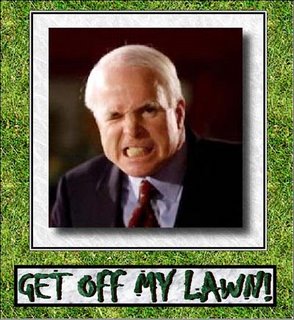 ...with Barack Obama as Dennis the Menace.

McCain had goaded Obama into visiting Iraq and Afghanistan, then watched as Obama's meetings with the leaders of those countries and Jordan, Israel, the Palestinians, Germany, France, and Great Britain dominated the news. Obama visited troops in Iraq and Afghanistan on his trip and had made numerous trips to Washington's Walter Reed Army Medical Center. But because the Obama campaign canceled a visit to wounded troops in Germany after the Pentagon raised concerns about political activity on a military base, McCain now has a new attack ad up on TV claiming that Obama cares more about yadda yadda yadda than he does about our soldiers.

John McCain is just angry. Angry all the time now.
Posted by J.W. Williamson at 7/27/2008 11:23:00 AM
Email ThisBlogThis!Share to TwitterShare to FacebookShare to Pinterest
Labels: Barack Obama, John McCain