McCain, About to Blow a Fuse 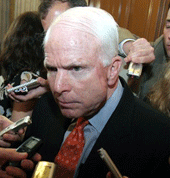 ABC News reporter David Wright, traveling with McCain in Colombia, asked the candidate to explain how his Vietnam experience prepared him for the Presidency.

"McCain became visibly angry .... 'Please,' he said, recoiling back in his seat in distaste at the very question."

McCain had to be rescued by his personal body servant Sen. Lindsey Graham (apparently Joe Liebermann was not available).

We're beginning to get it: John McCain is a house of cards built on his ace, "I was a prisoner of war." If the ace has no particular value for governing the country, he collapses.
Posted by J.W. Williamson at 7/02/2008 09:50:00 AM
Email ThisBlogThis!Share to TwitterShare to FacebookShare to Pinterest
Labels: John McCain, Lindsay Graham