Water and the Over-Educated 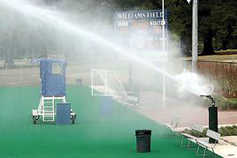 We weren't looking to see the word "doomsday" used in the context of N.C.'s current water-shortage crisis, yet there it is this a.m., in the N&O, coming out of the mouth of Siler City's town manager.

Meanwhile, and as an abiding symbol of how elite universities can share the burden of "do without," Duke & UNC-Chapel Hill made the news earlier last week for watering its Astroturf. Yep. The synthetic grass for field hockey is watered before each game and before each practice. The balls bounce better on wet Astroturf.

And don't criticize the universities for this massive waste of water. Poor things! They're FORCED to do this, they say, by the International Hockey Federation, whose rule-makers don't give a fig, evidently, about North Carolina's drought.

Well, as long as you have no option, guys! Maybe Siler City can beg for your run-off.

And incidentally, did you know that N.C. has a "Drought Management Advisory Council"? The counties where Astroturf gets a good soaking several times a week are both listed as suffering from "Exceptional Drought," the most dire designation.
Posted by J.W. Williamson at 10/21/2007 11:12:00 AM
Email ThisBlogThis!Share to TwitterShare to FacebookShare to Pinterest